Normally before a title match, I would drinking only root beer and eating only tuna fish today.... but until I get an EGO PRO Heavyweight Title shot due to my 2 and a half year unbeaten singles record, I am in the mood to sluff off. I can't be beat by mid-carders. Logan Alexander will be a greasy spot Saturday. Watch me preach---->

I am a man of funk. I am mentioned on a heavy metal website. It is about an awesome concert. I will be there and so should you. I will be breathing fire, juggling, doing song and dance, break-dancing, freestyle biking, and participating in competitive dance. OK.... maybe just a few jokes... I dunno. I'll be wearing a $1000 suit. That's all I can guarantee. Oh... I will also be hot. Click this link for like... details....

CLICK HERE LOVER OF FUNK FOR MO' INFRO
Posted by Funk Babies at 10:56 AM No comments:

Hello boys and girls.... has them Monday blues got you down? WELL... you could always funkify your life, children! Check out this classic funk track and have a happy Monday! I have a major announcement via video coming this week. STAY TUNED. It will arrive before your tax return will, sadly........ you know it's tru.....
br>
Posted by Funk Babies at 4:28 AM No comments:

Well, since I was just minding my own business talking this jive and that jive about my rasslin' life on Facebook, ole Dwayne Windham horned in about how he needed a rematch for the coveted Funk-strap. Well, on www.funkmasterv.com today, we will be celebrating Dwayne Windham Dude Dress all day long. Let's take a walk down Dude Dress memory lane, shall we???

Dwayne and I have always had a hot-cold relationship. My last pinfall/ submission loss was in the summer of 2010, when Bob O Mac needed a top rope Bob-O-Matic to put old Funky away in our infamous cage match. (This was the first match that anyone has ever kicked out of the Bob-O-Matic, by the way.) After the match, Warren Peace, Demon, Shane Daniels and yes, Dwayne Windham kicked me out of my own stable: Detroit Funk City and renamed it Creatures of the Night. Here, they sadly kick my friend Reverend Jay Perkey in the peni.
Dwayne temporarily had the upper hand on me again because he was able to snatch a briefcase in the TXW Scramble for the Gold 2 match. Oh yes.... he was happy. But when they opened up the briefcase, we all smiled for it was a booby prize. Dwayne Windham had to be someone's valet for a month... and luckily, TXW Commissioner David Branson had the love of Jesus in his heart and let the boy be my valet for a month, and the cavalcade of excitement continued as he had to do my every bidding or face being fired from TXW.

Barry Allen told me to make him wear a dress... so I did

Then, I charged naive children $5 to kiss him b/c they thought he was Justin Bieber

Then, I made him work on my uncle's farm

He then accompanied me to the ring, dressed as me, as I took on Spoony Mack. Well, he cheated and attacked Spoony, costing me an important win in the rankings via a DQ loss. This lead to our Loser Eats Dog Food match at the Halloween show. I pinned him after landing the 10,000 Watts of Funk, but the Creatures of the Night showed up and shoved Dog Food down my throat anyways, cause they hate rules. Alpo tastes like rear-end, by the way. How do dogs go from eating steak to that crap? Anyways...

This lead to the Christmas Chaos Chain on a Pole Main Event, which ended our feud at TXW. Spoiler alert- Funk Fans walked away smiling...

But a few months later, EGO PRO promoter Barry Allen decided to put the members of DFC in a unique tag match. If Shane Daniels, the EGO PRO Champion, got pinned or submitted, would lose his belt. The Demon would lose his mask if he took the fall. A losing Funkmaster V's afro would be shaved in the ring, and if Dwayne lost, he would have to wrestle the next show in a dress. Hmmmmm..... I wonder what happened? Karma is a beach, I think I heard, once. All I know is that what comes around, goes around.

When I preach at you children, I don't lie. The extra sexy team of Funkmaster V, Bob O Mac, and Spoony Mack (with the lovely Funkettes) took out a foreboding Money Shot Mafia at EGO PRO Saturday night. The win got Spoony a #1 Contender spot and reintroduced the fact that I travel with the sexiest women in wrestling. It was good to see Bob back on the side of the saints. 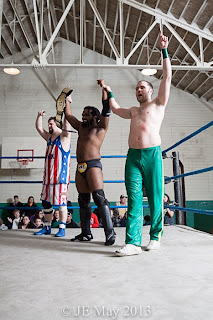 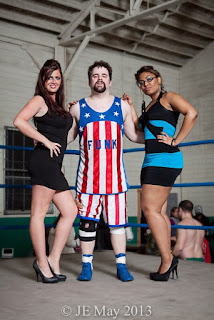 It was also good to start selling CD's and DVD's too since I have had a nightmare trying to intergrate that feature online. Oh well... Until I figure that out, hit me up at wrestling shows or other appearances.... LIKE... 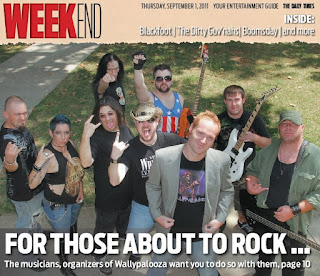 I will be hosting night 1 of Wally Miles's last rock concert-palooza-festival thingy. I will be breakdancing, telling jokes, slapping grown men and most importantly introducing bands. If you like-a-da rock and roll, come down to Maryville March number one. CLICK HERE FO' MO' INFO
Posted by Funk Babies at 1:48 PM No comments:

Warren Peace gets to say a bunch of fluffy nothingness, and then at (1:20) the sexy trio of Macs (Spoony Mack, Bob O Mac, and the Mack of Funk, Funkmaster V) preaches for you and your kin. Be there February 9th in Sweetwater TN, 7PM Lutrell Community Center!!!

Posted by Funk Babies at 3:07 AM No comments: 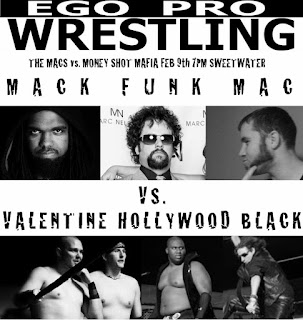 Somebody told daddy last week that the Money Shot Mafia was going to put the boots to Bob O Mac at the EGO PRO show. By the time I showed up in Sweetwater, I saw a 4 on 2 scenario with Spoony Mack being thrown back into the mix, and I intervened the only way I knew how.

Mac MacMurray booked the 6 man match for Feb 9th at the Luttrell Community Center in Sweetwater.    Let's face it... there are tons of history between them five men. Me, not so much... except for Bob O Mac and I. Bob is back on the straight and narrow, and after all this time we can fight together in the spotlight and be the example we need to be for wrestling fans and kids.

If you have folding money, a heart full of FUNK, and two legs and a butt, be there on Feb 9th to help the good guys take out the crotch stain of EGO PRO wrestling.

Posted by Funk Babies at 4:32 AM No comments: