A Question and Answer Segment

Can you give me a Toot Toot? Well I will tell you who can and that is the one and the onlyFunkmaster V himself.
Click here for the full interview:
http://knoxville.ourcityradio.com/sports/interview-master-funk
Posted by Funk Babies at 1:59 PM No comments:

Make sure to tune in tonight starting at 8 pm EST for "The Mothership" ft. DJ Drew, Knoxville's home for the very best in FUNK and CLASSIC HIP HOP! And to get you in the Christmas groove, your "Mothership" captain will be bringing you a FUNKY Christmas special filled with lots of booty shakin' tunes to get you in the proper mood for the holiday season! And joining DJ Drew tonight will be wrestler, musician, local celebrity Funkmaster V, aka Vinnie Vineyard!

1941, Born on this day, Maurice White, leader and founder of Earth, Wind & Fire.

I would have to say that 2013 has been the wildest year of my life- and one of the most eventful. Starting my own Taxi Cab Business: Funkmaster V's Uptown Cabs of Renown/ Winning the EGO Heavyweight Championship & East Tennessee Youtube TV Title in the same night/ Front page appearances on newspapers, articles in magazines, interviews on Podcasts, radio, blogs etc./ The announcement of me running for public office in 2014... personal triumphs, memories with family and friends and the hum drum of everyday piddling. WHEW! I've been a busy man of funk. 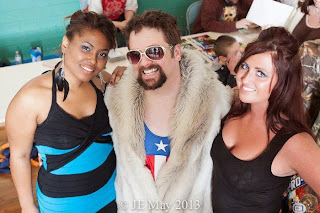 But remember- my family, friends, fans, customers, and fellow believers in the funk have lifted me up. I couldn't have done jack-squat without you. I am proud to be your friendly neighborhood Funkmaster V... and in 2014... expect BIGGER AND BETTER THINGS..... including................ the Album (Yes I'm old) Release of "FUNKMASTER V: OR HOW I LEARNED TO STOP WORRYING AND LOVE THE FUNK" and possible me delving back into radio. Which is one of my greatest loves.

To make your own 2014 version of Funkmaster V for your own personal use.... heed the following:
Take one part Venus Flytrap, One part Ric Flair, One part Larry Graham, One part Ron Paul, One part James Brown, One part Joe Namath, One part Mule kick to the face. MIx. Heat for 99 1/2 days at 250. Serves 1-3 Beautiful Women.
Posted by Funk Babies at 5:25 AM No comments:

Thursday I will be on a groovilicious podcast starting at 9PM. SciMAX Radio... but I cannot give up any info on the ultra secretive MOTHERSHIP. Here's the link... bring a drink.

Posted by Funk Babies at 4:26 AM No comments: