Wheeze had a big week

Big N Funky Pays Homage to Bob Newhart and Marvel
The comedic stylings of Big N Funky Productions is back to stroking that funny bone as they release their new super hero story "Davidson Graves: The Unsung Hero of the Battle of New York" in concert with the release of Captain Marvel in theaters this week. The people that have watched it so far have fallen in love with Travis again, as he did a great job updating the old "Bob Newhart King Kong Phone Bit". Watch out, there's a surprise twist at the end.
Big N Funky vs. Flippity-Dippity Doo Rasslers


﻿
After some time away from the sport, Big Luke and Funkmaster V check into the world of pro wrestling via the interwebs. They see that flipping has replaced storytelling, kick-pads have replaced selling, and grabbing people by the junk has replaced believability. After watching a few videos... they have vowed to take out flippity-dippity doo rasslers one at a time to save the sport they love.
BnFGSaGG: Episode 'Bring the Heat' 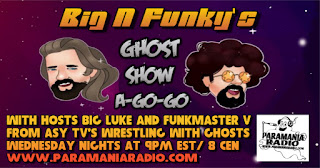 On the worst rated show on the Paramania Radio Network, we finally had a show worth listening to. Big Luke and Funkmaster V talk about their episode of Wrestling With Ghosts filmed at Hales Bar Dam, the episode of the Quilted Northerners filmed there, and why the Dam has closed. Plus, the passing of King Kong Bundy, who pinned Luke for the 5 count on more than one occasion. Check out the show here: BIG N FUNKY'S GHOST SHOW A GO GO

Big N Funky, and specifically ASY Paranormal and Wrestling With Ghosts, will be setting up at the largest comic con in the world on July 19th, 2019. We will have some zany paranormal gimmicks, media packages, and info about the newest all-paranormal TV network in the world!!!