Libertarian of Funk - A Tiny Introduction

The Libertarian of Funk- A Tiny Introduction.
Remade the video with less rabbit trails and less florescent lights. Wanna investigate a good third party option b/c the Democrats and Republicans have made you cry for years? Check out my meager vid.
w/ The Libertarian Party of Tennessee w/ Libertarian Party

The Libertarian of Funk- A Tiny Introduction
youtube.com
Vinnie Vineyard (aka Funkmaster V) shares a little of what the Libertarian stance is, how the Democrats and Republicans are basically the same thing, and is rudely interrupt
Posted by Funk Babies at 12:40 PM No comments:

2/10 Vinnie Vineyard announces running for District 13 House Representative with a small group of other freedom lovers as the first class of Libertarians to ever officially run on a Tennessee ballot.
2/10 First full week of radio broadcasts as the Urban Personality on Knoxville Our City Radio
2/10 Funkmaster V's Uptown Cabs of Renown will hit on Google, YP, and Groupon this week
2/11 Grapple Wrestling Magazine photo shoot with Brittany Foxx aka Rachel Byrd will be released
2/15 The Artist Formerly Known as Funkmaster V in action withShane Daniels against Barry Allen and Dwayne Windham... EGO Pro Wrestling Athens Armory 7PM. Be there... it's God's Will.

Vinnie Vineyard (aka Funkmaster V) has had almost 25 vocations in his career. From owning his own business to being an entertainer, from being a counselor to a HVAC tech and many points in between… he has befriended, dealt with, and gotten to know just about every type of person there is to know in Knox County and beyond.
What he has found out is that most people are pretty much the same. They want their families to be taken care of. They want respect. They want love. They want good food, fun, enjoyable memories, accomplishments and meaningful relationships. What people do not need or want is the government interfering in their pursuit of happiness. This “Invisible Hand” means that Americans can make the best decisions for themselves with no help from the government. If someone’s rights are being violated, sure, the government should step in to serve and protect the innocent, but in most cases, the way people want to live their lives… should be up to the citizen.
As Republicans and Democrats fight over debates that will never end (Gay marriage, Abortion issues, Stem Cell Research) and thus only exist to drum up voting support from their right and left bases, Vinnie Vineyard is more concerned with exposing bipartisanism for what it really is (a dog and pony show) and delving deeper into issues that are more pressing. If you are sick of Republicans and Democrats saying opposite things and then acting the same, or you are waking up to the fact that there are no differences in the two main parties, or you can easily spot that most leaders from both of those parties are painfully ineffective, it’s time to believe in the funk… and vote Libertarian in 2014.
“Say what y’all want to about CHANGE, REVOLUTION… I’m gonna say what I’m saying…” -Chuck D from Public Enemy
http://lptn.org/candidateselected-libertarians

Posted by Funk Babies at 3:45 AM No comments: 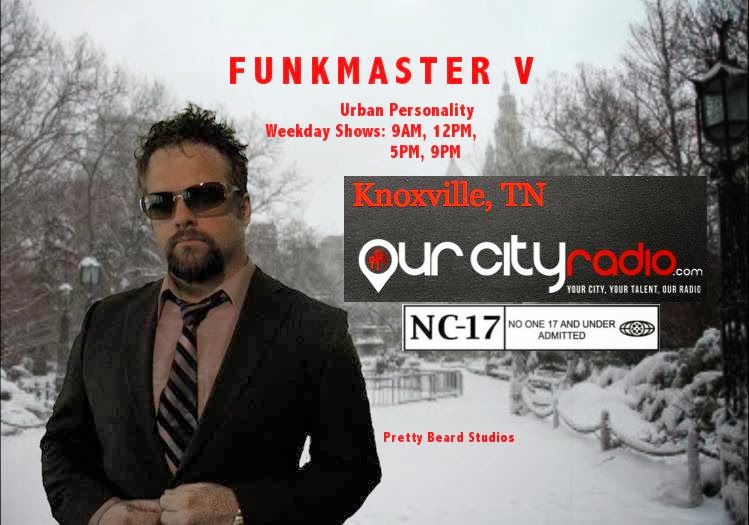 Tonight at 9PM I am debuting my new nightly show "The Nights Over Knoxville Urban Show" on Knoxville Our City Radio. I will be playing the best independent collection of hip hop, R&B, funk, soul, rap and more from around the world and more importantly from around town.


KNOXVILLE OUR CITY RADIO- URBAN
Posted by Funk Babies at 10:10 AM No comments: